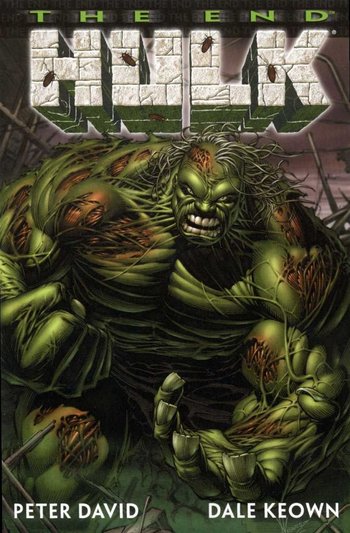 "My name is Bruce Banner. I am over two hundred years old, I think. I feel... cold. And I should be dying very soon... I want to. God in heaven, I want to. But he won't let me."
— Bruce Banner
Advertisement:

Hulk: The End is a 2002 Marvel comic book written by Peter David and illustrated by Dale Keown. It tells the story of an old Bruce Banner as the last surviving human on an Earth devastated by nuclear war, his only companion being a "Vidbot" left by alien races to document the demise of humanity. Although Banner wants nothing more than to die, the Hulk refuses to allow this, emerging whenever Banner is in danger. To make things worse, the pair are constantly pursued by swarms of giant evolved cockroaches which feed on the Hulk's constantly regenerating body...

Hulk: The End was the first in a series of titles in which creators imagined the "last story" of certain Marvel characters.

Hulk: The End provides examples of: