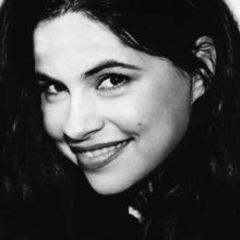 Saffron Henderson (born September 25, 1965) is a Canadian voice actress and singer and the daughter of Chilliwack founder and lead vocalist Bill Henderson. She has voiced various characters from anime series. She is usually cast as mature and occasionally flirtatious young women, or as a child, mostly young boys.

Her well-known roles include Shenhua from Black Lagoon, Aisha from Gundam SEED, Sachiko Yagami from Death Note, and Oxnard from Hamtaro. She was also the first voice of Naruto's Kurenai Yuhi before being replaced by Mary Elizabeth McGlynn.

Henderson was replaced by Jillian Michaels as Gohan in The Ocean Group dub of Dragon Ball Z. Henderson had been voicing the character from the very beginning (since 1996) but had to quit just before voice work began on the Cell Games Saga. The reason being is that her wedding, which took place sometime in January or February 2001, conflicted with her allotted work schedule for the series, which was being recorded at a very rapid pace. Both of her roles in Inuyasha were also replaced, with Rebecca Shoichet taking over both Sota and Eri after Henderson played them for the first half of the series.

In an Animerica interview, she stated that she was in the movies The Fly II and Friday the 13th Part VIII: Jason Takes Manhattan. She played Veronica Quaife, taking over the Geena Davis role, and the rocker J.J. Jarret, whom Jason Voorhees used a guitar to kill with.

And as for the Tropes that are known with Saffron Henderson: