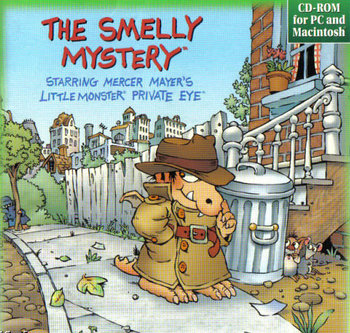 The Smelly Mystery: Starring Little Monster Private Eye is a point-and-click children's game made by GT Interactive Software in 1997. It stars Little Monster Private Eye and his faithful talking Kerploppus that is simply called "Detective Kerploppus," created by Mercer Mayer (whom also created Little Critter). It is known for being a combination Adventure Game and an interactive animated storybook, also including a mini-game. It is loosely based off the 1980 book "Little Monster's Scratch-n-Sniff Mystery", but with numerous changes made

The story involves Little Monster Private Eye and Detective Kerploppus being called onto a case where the Evil Smell Switcher has been switching the smells around Monsterville and causing distress among others. Clues can be found hidden among the pages, along with numerous hidden clickable animations and Easter Eggs. The game is noted for its' Multiple Endings, where the identity of the Smell Switcher is different each time the game is played, and for containing numerous Shout Outs, Parental Bonuses and parodies of existing pop songs.

Although the characters had previously appeared in the Living Books game "Little Monster at School," the characters themselves are the only thing both games have in common. It later had a sequel in 2001 called The Mummy Mystery.

Tropes in The Smelly Mystery: