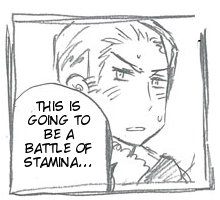 Part of an annual Hetalia holiday tradition, the Hetalia Bloodbath 2011 is just beginning, and Germany, Italy and Japan are our hosts, filling your requests and keeping everything calm and collected. Hilarity still manages to ensue. However, a few things are stirring this Christmas night: France is unsatisfied with the way the Axis are handling it, Romania and Hungary may or may not be up to something, and someone is haunting Finland with an ominous monologue...

You can read the scanlations here

Also has its own Memetic Mutation page.

Information about the Hetalia Fandomly here.

Now comes with it's own Steve Wars.

This event shows examples of the following tropes