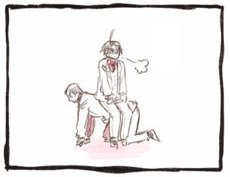 The birth of a legend.

A list of memes started by the Hetalia Bloodbath 2011. Visit the main series, the previous year, and CAPTALIA pages respectively.