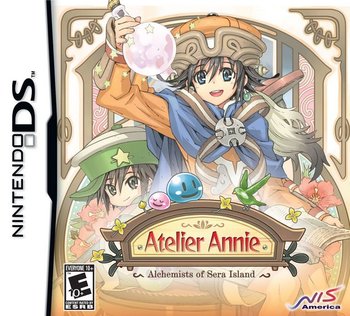 Annie (center) and Pepe (left)
Atelier Annie: Alchemists of Sera Island is the second Nintendo DS entry in Gust Corporation's Atelier series, and is both the only DS Atelier title and the first Atelier with "traditional gameplay" to be released in North America.
Advertisement:

A lazy young girl named Annie Eilenberg is unknowingly shipped off to Sera Island by her parents in order to force her to make something of herself. Left only with a note from her grandfather and a fairy sidekick named Pepe, she is pushed by her family to take up the trade of alchemy. Shortly after she wakes up on the island for the first time, she is informed by a young man named Hans Arlens of a contest being held on the island. She and several other alchemists are to compete to build Sera Island into a resort paradise within three years. The person whose alchemy most impresses the judges will earn themself the title of "Meister", granting them a boatload of money and the opportunity to win the hand in marriage of one of the King's children.

Hearing those magic words ("money" and "marrying up"), Annie gets right to work...