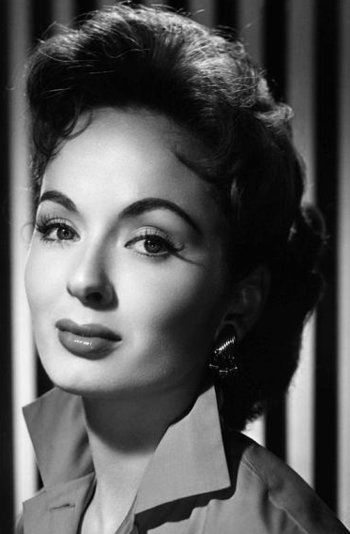 Ann Marie Blyth (born August 16, 1928 in Mount Kisco, New York) is a retired American actress and singer, mostly known for starring alongside Joan Crawford in the 1945 Film Noir Mildred Pierce as the spoilt and greedy daughter Veda. She is also one of the last surviving actresses from the The Golden Age of Hollywood, with her career being at its best in The '40s and The '50s.

Blyth began her showbiz career singing on the radio at five years old. She then started to appear in many Broadway productions, which led to her being signed by Universal Studios, starring in three teenage-aimed movie musicals alongside Dennis O'Connor in the early 1940s, being typecasted as nice girls. Blyth soon defied this with her performance in the Warner Bros. movie Mildred Pierce as a completely different archetype, the scheming Veda Pierce, which got her an Oscar nomination for Best Supporting Actress at 16 years old — one of the youngest actresses ever nominated at the time.

Soon after this, Blyth was one of the most wanted actresses throughout the rest of the 1940s, and she appeared in several romantic movies opposite the biggest actors at the time, such as Gregory Peck, Paul Newman and Robert Mitchum. When Hollywood discovered that she could sing opera, Blyth appeared in movie musicals in the 1950s. One of the most well-known of these musicals are The Helen Morgan Story, which was her last film role.note Ironically, in this role, her singing voice was dubbed by Gogi Grant, despite having the capabilities to sound almost identical to Morgan.

Blyth's film career finished at the end of the 1950s. She returned to stage productions and radio, and appeared on television in minor roles for 30 years until 1985 on an episode of Murder, She Wrote. She later stated that she had left the film industry to focus on raising her family.

Ann is also known for being one of the only Hollywood actresses that was Happily Married. In 1953, she married Dr James McNulty (brother of singer Dennis Day) and was with him until his death in 2007. They had five children together — only one is an actor.

In the present day, Ann Blyth has been an active honorary "ambassador" of TCM and their movie festivals. Despite many of the films being very popular at the time of their releases, several are hard to find (mostly suffering from Keep Circulating the Tapes) but occasionally having the Archive Panic. She is the last surviving member of the movie Mildred Pierce and usually makes guest appearances on its anniversary screenings.