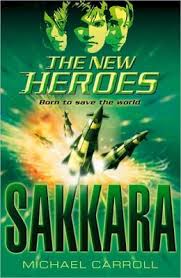 The New Heroes, also known as Quantum Prophecy Stateside, is a trilogy of novels by Irish author Michael Carroll. The books are set in a universe where superheroes and supervillains were commonplace until 10 years previously, when every one of them vanished. The books detail the adventures of the first of a new generation of hero's, Colin, Danny, and Reneta.

At times, the series subverts the conventions of the superhero genre but at other times gleefully embraces them.

Also has Superhuman a prequel series set 26 years before the events of book one.