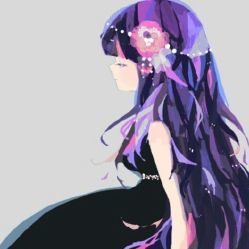 The totally-not-taken-from-Google-Images cover.
Mi Tru Lov is an Hetalia: Axis Powers fanfic.The fanfic follows a 14-year-old Japanese girl named Kawaiilyn Sugoi. After her sister Bajin tells her that she is not kawaii, she jumps into a mysterious portal. From thereon, we see Kawaiilyn arrive and take to life in the Hetalia world, which includes but by no means is limited to: fangirling over the main characters before falling in love with Japan; befriending the canon characters; becoming involved in efforts to stop her cousins Vommy and Snoteleks teaming up with Russia to kill the other nations and gaining elemental powers.The spelling of the fanfic is notoriously poor, despite the alleged help of the author's "fren bey". It has progressively worsened as the fic has continued, with only a few unintelligible words in the first chapter compared to a large part of the 13th chapter becoming unreadable. Perhaps the only existing critique of this fic, updated with every new chapter, can be found here

. It is confirmed by the author to be a "satirical fiction".