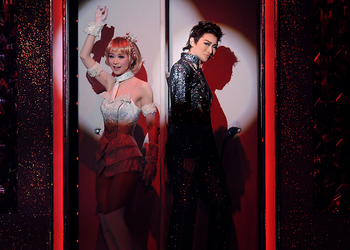 The bad lot comes from the moon.

A Takarazuka Revue production performed by Moon Troupe, BADDY premiered in 2018 as a double feature with Company (Takarazuka Revue). It starred Tamaki Ryou as Baddy and Manaki Reika as Goody.

The story is set in the capital of Earth, Takarazuka-City. The peaceful planet Earth — a united world where war, crime, and all evils have been overcome — receives a visit from Baddy, a vagabond rogue from the Moon. He is an extremely cool person, unlike anything that the Peaceful Planet Earth has seen, and on top of that a heavy smoker. But smoking is outlawed across the face of the Earth. Baddy, accepting no limits, leads his gang to engage in all sorts of wrongdoing to make this dull planet more interesting. His final goal is to steal the planetary budget guarded in Takarazuka Big Theater Bank. But the almighty investigator Goody is gaining on him!