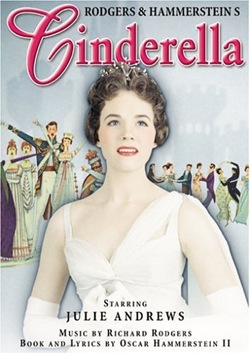 "All my life, I'll dream of this lovely, lovely night!"
"Impossible things are happening every day!"
Advertisement:

Rodgers and Hammerstein's musical adaptation of the fairytale. It was originally written and performed live on CBS television in 1957, with Julie Andrews starring in the title role. A 1965 remake, starring Lesley Ann Warren and with a revised script (plus a Cut Song from South Pacific) was rerun well into The '90s. Walt Disney Presents released a film version in 1997.

Not to be confused with the other musical Cinderella, a Fractured Fairy Tale spin on the fairytale written by Andrew Lloyd Webber, which made its West End debut in 2021.

open/close all folders
Tropes shared by multiple versions
The original musical
The 1965 remake
Advertisement:
The 1997 version
Has its own page.
The 2013 version
"Do I want you because you're wonderful,
Or are you wonderful because I want you?
Are you the sweet invention of a lover's dream
Or are you really as beautiful as you seem?"