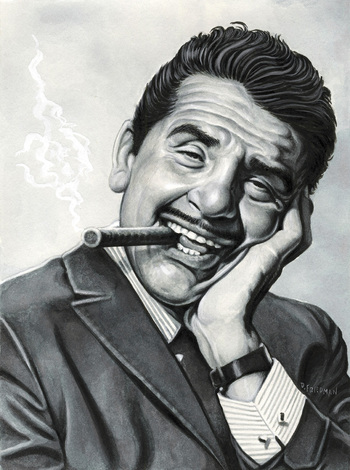 "This is not primarily a comedy show, this is more or less an experiment that I'm doing. There is a strong element of comedy that runs through it, but it is a unique comedy. My particular affinity for the medium is to make it an electronic one and to use it for its own intrinsic value and approach. But I don't put it above - nor do I put it below - other forms of comedy. This happens to be mine."
Advertisement:

Ernie Kovacs (January 23, 1919 – January 19, 1962) was a tremendously influential comedian, writer, and director for television, as well as an actor and novelist. He's most well-known for his work during the Golden Age of Television, which was applauded for its use of surreal, absurd comedy and one of the first people to actively experiment with the television medium. While a large portion of his work has disappeared over the years, his work was beloved in his day, having fans including Jack Lemmon, Billy Wilder, Groucho Marx, Jack Benny, James Stewart and the Rat Pack and has influenced countless comedians.

After doing a variety of local work, Kovacs gained his first big break in Three To Get Ready, a local news show that demonstrated his gift for off-beat visual comedy and impressed so many people that he gained more and more bigger shows until he started working for WCBS-TV, and from there, he created a variety of different and unique programs and specials for various networks. On many of these shows, he not only made various brief sketches, but also developed many characters, such as Percy Dovetonsils, a lisping, Ambiguously Gay poetry buff, the Chaplinesque bumbler, Eugene, and German disk jockey, Wolfgang von Sauerbraten, among many others. His comedy relied heavily on unexpected adlibbing, Surreal Humor, visual jokes, satirizing various tropes and shows of the day, along with lots of and Breaking the Fourth Wall. As much as he was known for his comedy, Kovacs has also been Vindicated by History as one of the first people to take television as a valid artform and for experimenting with the visual tricks of the medium long before others had been doing so.

He was Happily Married to his beloved wife and muse, Edie Adams, an accomplished actress and singer in her own right who often accompanied Kovacs in his shows and sketches. His career was sadly cut short by a fatal car crash on January 19, 1962, depriving the world of much more fantastic work to come from this genius comic. To make matters worse, Kovacs had been notorious for being in debt, owing thousands to the IRS, doing any work to pay the bills and owing ABC so much that they started erasing his surviving tapes for blank space.

Despite this, Kovacs' surviving work has gained a resurgence in recent years. His highly experimental, very funny TV programs have been regarded as some of the best work in the history of the medium and his anarchic, surreal, censor-be-damned style of comedy helped inspire many future comedians, with Conan O'Brien, David Letterman, Chevy Chase and Jim Henson openly acknowledged him as an inspiration and as master of the form. His work can easily be found on YouTube and Shout! Factory has restored and released as much of his surviving material on some very impressive collections, found here

,ensuring that his work will live on for future generations to come.