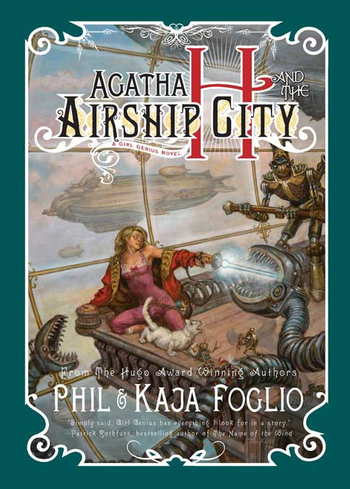 Fight on Castle Wulfenbach
"In conclusion, the evidence shows that there has not been a legitimate sighting of either William or Barry Heterodyne since they assisted int he cleanup of Woggleburg after the destruction of Lord Womak's castle sixteen years ago. All such reported sightings have proved to be either fradulent Heterodynes or simple cases of mistaken identity. However, amongst the general populace, the belief that they are still 'out there' fighting the good fight remains unshakable, as is the conviction that someday, they will return. This belief remains despite the fact that their castle is in ruins, their lands are overrun, their servants are scattered and indeed nothing remains but their name."
—Summary of report to Baron Wulfenbach
Advertisement:

A novelization of the first major Story Arc (volumes 1-3) of the award-winning webcomic series Girl Genius, released in Jan 2011. It follows the webcomic very closely, often having a distinct 1:1 mapping between panel and paragraph, but it does have a few interesting departures.

Agatha H. and the Airship City is a gaslamp fantasy adventure starring Agatha Clay. As the novel starts, she is an assistant at Transylvania Polygnostic University who gets caught up in the arrival of Baron Klaus Wolfenbach, the iron-fisted ruler of most of Europa. She also seems to have ties to the heroic Heterodyne Boys, who vanished years ago.

This book is followed by Agatha H. and the Clockwork Princess.