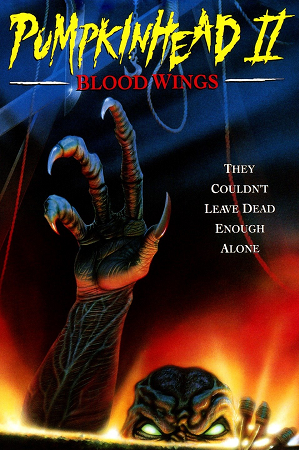 Pumpkinhead II: Blood Wings (1994) is a horror movie and the first sequel to Pumpkinhead.

A group of thrill-seeking teenagers accidentally run over an old witch who once sought to resurrect her dead son, but realized that he would come back as an unstoppable demon. The teenagers steal her book of spells and resurrect the demon, which proceeds to go on a killing spree.

It's also the basis for the FMV videogame Bloodwings: Pumpkinhead's Revenge, perhaps because of the presumably cheap license.