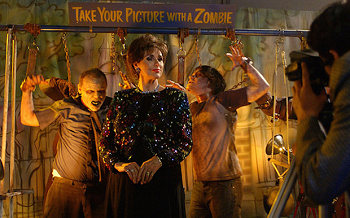 A foul beast from the depths of the abyss terrorizes a small peasant village. It devours their livestock, it kidnaps their children, and the less said about what it does to their women, the better. A band of purehearted heroes hears of their plight and sets off to slay the monster. The town mayor meets them at the gates to greet them... and insist that they leave immediately.

"Kill the beast?" he laughs. "Why would we ever want to do that? Ever since he showed up, the king has paid us more in aid money than we'd ever get through farming! Now turn around and head home, before I have to send the mob after you with Torches and Pitchforks!"

Sometimes it happens: the monster makes money, and its purported "victims" — or a single shrewd (and often heartless) member of the public — will put up with it, or even harness it for the sake of the benefits it brings, despite the harm it causes.