Literature / The Dark Legacy Of Shannara 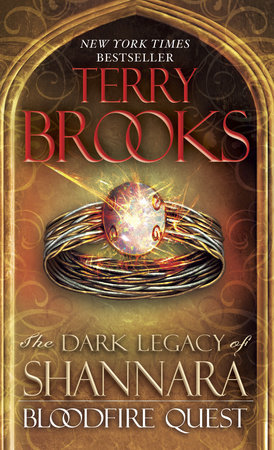 An installment in Terry Brooks' long-running Shannara series, Dark Legacy picks up one hundred years after the conclusion of High Druid. It is the penultimate installment in the franchise, followed by The Defenders of Shannara, and is composed of Wards of Faerie, Bloodfire Quest, and Witch-Wraith.
Advertisement:

It has been a century since Shadea a'Ru's coup d'etat shattered the Third Druid Council, and nearly resulted in the collapse of the Forbidding and the release of the Demons contained within. For decades, Khyber Elessedil has been fighting to save the Druid Order, and fulfill her predecessor, Grianne Ohmsford's, hopes for it. When Druid trainee and Elven Princess Aphenglow Elessedil uncovers evidence that the lost Elfstones of Faerie are somewhere within the Forbidding, Khyber, who has nothing to lose, puts together an expedition to go and find them.

Joining Khyber on this trip are the Ohmsford twins Redden and Railing, and their friend and crush, Mirai Leah, who see the experience as little more than one big adventure. The Forbidding is a dangerous place, however, and Tael Riverine, Straken Lord, and current leader of the Demons, has not forgotten the humiliation that he endured at the hands of the last band of humans to enter his domain. He wants Khyber and the Ohmsfords dead, and there are few lines he won't cross to make sure that happens.

Back in the Four Lands, the situation has also taken a turn for the worse. The Federation, always an enemy of the Elves and the Druids alike, has come under the sway of Edinja Orle, an Evil Sorcerer who wishes to be Prime Minister. Even more troubling is the apparent sickness of the Ellcrys, the tree that maintains the Forbidding and keeps the Demons sealed away from the real world. And as Aphenglow and her sister Arling set out on a journey to create a new Ellcrys, and Edinja Orle interferes for his own reasons, Tael Riverine amasses his legions, with the goal of destroying the intruders, breaking free of the Forbidding, and doing what The Dagda Mor could not—bring the Four Lands under the control of the Demons.