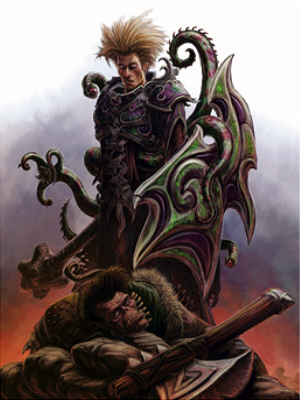 It's not as dirty as it looks.
Advertisement:

When a foreign entity like that of a Symbiote, Body Snatcher, or even a Hacker (when regarding machines like robots and computers) enters/outright hijacks a body, the possessed subject is called the Host, while the possessing subject is the Guest (taken from the terminology used with parasites).

The basic purpose of the host varies on what the point was for it to have been hijacked in the first place. Sometimes it's used as a disguise, other times it's used as a decoy and distraction, even simply being a weapon or piece of armor that the possessor uses to cause sheer chaos and destruction. And then, sometimes... a host can be used for titillation.

For details on the passive/aggressive relationships a Host can have with its "Guest," view The Symbiote. Has absolutely zilch to do with The Host.

Truth in Television for many people who believe it is possible for a Spirit Medium to be "hijacked", or more often, invite one or more "guests" in as a Willing Channeler. Some host/spirit-guest relationships coexist in friendly association, and can last for decades similar to a Split-Personality Team. An uninvited but harmless or beneficial "hijacking" guest is called a "walk-in"; this can happen with mediums or ordinary people, often after a life-threatening event.