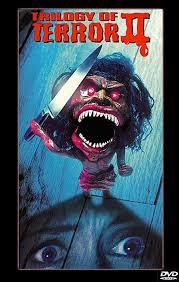 A 1996 sequel to Trilogy of Terror, once again directed by Dan Curtis for television, bringing three new tales of terror.