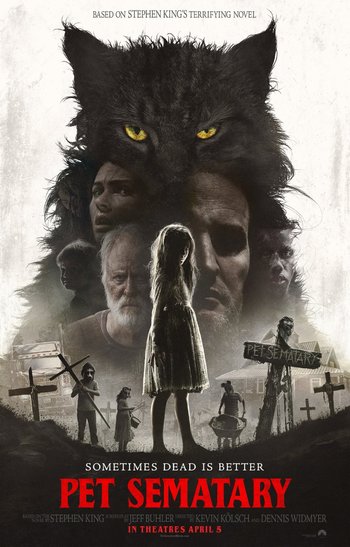 "It's that goddamn place. It feeds on your grief, gets into your mind."
Louis: There’s a place in the woods. That place I was telling you about. I couldn’t understand it until I buried Church up there. That cat was dead until I buried him in the ground and it brought him back.
Rachel: He wasn’t the same after that.
Advertisement:

A doctor and his family decide to leave the big city for the country. Upon arriving there, they discover a pet cemetery that exists above an ancient burial ground. When his daughter dies from an accident, the doctor decides to bury her in the pet cemetery, which causes supernatural consequences.

Pet Sematary is based on a novel with the same name, written by Stephen King. Directed by Kevin Kölsch and Dennis Widmyer (Starry Eyes), it is unrelated to the 1989 adaptation, though it does contain a cover of The Ramones' song from that film. The film's cast includes Jason Clarke as Louis Creed, Amy Seimetz as Rachel Creed, and John Lithgow as Judd Crandall.

A prequel, to be directed by Lindsey Beer, is in development for Paramount+. Details are unknown, but a young Judd Crandall will appear (played by Jackson White). It will also star Pam Grier, Natalie Alyn Lind, Jack Mulhern, and Forrest Goodluck.