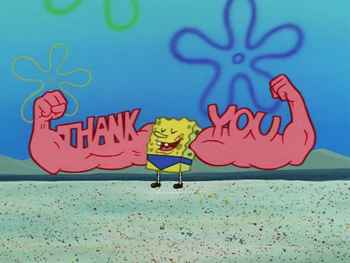 "Do these muscles lie?"
Advertisement:

SpongeBob wants big muscles, but Sandy's workouts prove too intense for him, so he decides to fake it instead by wearing inflatable "Anchor Arms". Soon he's the coolest guy at the beach, but can he keep up his charade after Sandy enters him in an anchor tossing contest? 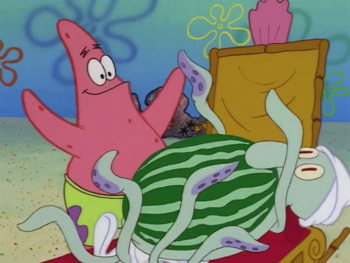 While Squidward takes a shower, SpongeBob and Patrick accidentally melt his wax figure of himself, making them think they killed Squidward. When Squidward steps out, they think he's a ghost and beg for forgiveness. Squidward decides to use this to his advantage and make them his personal servants, but he soon may wish he really was dead.

Example of:
Repeat What You Just Said