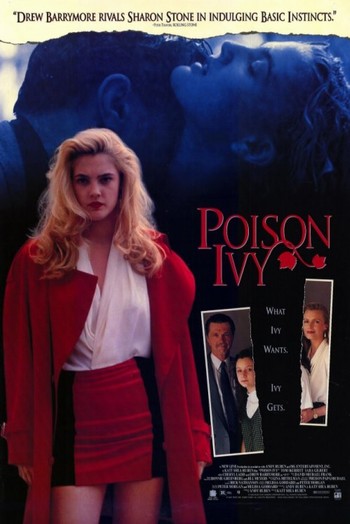 What Ivy wants, Ivy gets.
Advertisement:

Poison Ivy is a 1992 thriller directed by Katt Shea and starring Drew Barrymore.

Sylvie Cooper (Sara Gilbert) attends a private school in Los Angeles. She doesn't have many friends until she meets Ivy (Barrymore), a student attending the school on a scholarship. She quickly becomes close friends with Ivy and lets Ivy live in her house. However, Sylvie's friendship isn't enough for Ivy; she wants so much more. And whatever Ivy wants, Ivy gets.

This movie was followed by three sequels (two Direct to Video and one Made-for-TV Movie) that were In Name Only. The second film starred Alyssa Milano (Who's the Boss?, Charmed), while the third starred Jaime Pressly (My Name Is Earl) and the fourth and made-for-TV one starred Miriam McDonald (Degrassi).

For the Batman villain of the same name, see this page.