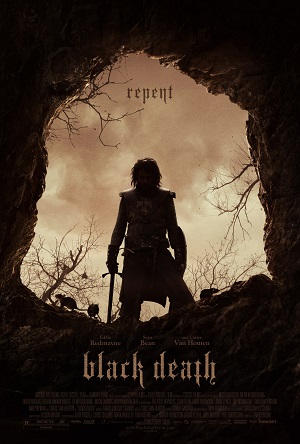 In 1348, the Bubonic Plague sweeps through England. Frightened, many people blame witches or their own sins. Osmund, a novice in a monastery, volunteers to guide knight Ulric and his men to investigate a village which has suspiciously managed to avoid the plague. What the knights do not know is that Osmund volunteered to have a chance to see his girl.

One of the primary themes of the film is total uncertainty with how one interacts with the world, abounding with cases of Maybe Magic, Maybe Mundane. The whispers in the woods may be demons, or they may be highwaymen. The village witch may be in league with Satan, or she may just know how to brew poisons. The town may be warded, or it may just be isolated. The plague may target the unrighteous first, or everyone may be damned together.