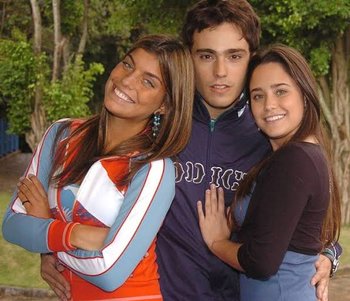 From the left to right: Jaque (Joana Balaguer), Bernardo (Thiago Rodrigues) and Betina (Fernanda Vasconcellos), the protagonists of season 12.
Advertisement:

"Malhação" ("Young Hearts" in English) is a Brazilian television series.

Malhação was conceived in 1995 by Globo to be different from the other telenovelas on the network: instead of a plot with a defined beginning, middle and end, Malhação would be an anthology. Each season usually lasts around a year, each one with different protagonists. Because of the nature of this narrative, characters could come and go each year, while more popular ones continued. Some protagonists and villains may continue into the next season, but as supporting characters.

During its first half, Malhação tried to maintain the same continuity. The first five seasons are located at the "Malhação" gym, and the following twelve seasons are located at the "Multipla Escolha" ("Multiple Choice") high school. As of Season 18, the series has finally abandoned any continuity for good, with each season set in different locations and with different characters.

In general, Malhação revolves around teenagers who have to deal with love triangles, sex, drugs, unplanned pregnancies, school routine, etc. The series is also known for having been the debut of dozens of actors and actresses who would become famous in the future.

Malhação had 27 seasons. Because of the COVID-19 pandemic, the series was forced to take a hiatus of more than a year for the first time, with no expected return. In 2021, Globo officially canceled the series, thus marking the end of an era.

The series has had two spin-offs so far: the first was "Malhação de Verão" (1996), which is basically a bridge between the first and second seasons and is focused on the characters taking a vacation at the ranch. The second spin-off is "As Five" (2020), focusing on five characters from season 25. As Five has already been renewed for a second season.