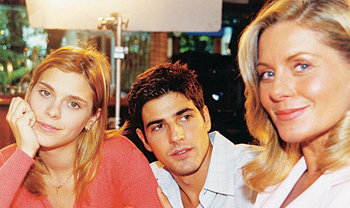 Laços de Família (Family Ties) is a Brazilian telenovela produced and aired by Rede Globo, from June 5, 2000 to February 3, 2001. With a total of 209 chapters (150 in the international version displayed in countries such as Portugal), it was written by Manoel Carlos. It starred Vera Fischer and Carolina Dieckmann and actors Reynaldo Gianecchini, José Mayer, Tony Ramos, as the respective protagonists of the plot, and actress Deborah Secco as the main antagonist of the story.

It tells the story of Helena, a beautiful, successful 45-year-old woman who runs a beauty clinic. Edu is a handsome young guy of 25 years. The two meet in a car accident, and after the initial fights, the two fall madly in love with each other. Their dating is criticized by family and friends of both, especially Edu's aunt (who ironically is married to a man much younger than her). The situation worsens when Camila, Helena's beautiful daughter, also falls in love with Edu.