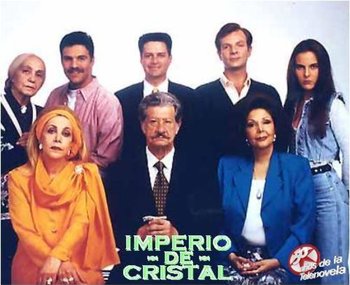 Imperio de cristal ("Crystal Empire") is a 1994 Mexican telenovela, based on the series I, Claudius. It stars Rebecca Jones as Sofia Vidal, a woman whose life changes after attending a party at the Lombardos' mansion with her husband Uriel and her daughter Katia, César, the headship of the Lombardo family and company (the powerful crystal entrepreneurs), finds out that Sofia is the daughter of his impossible love, Elena, who died tragically in an accident, when Sofia was still a child.

César, without Sofia knowing it, decides to protect her because of Elena's memory, which he cherishes still. César is married in second nuptials to Livia Arizmendi, a former actress who dreams on recovering her career. Sofia's appearance seriously worries Livia, considering her an intruder who could displace her, just as Elena would have done in the past. Livia, who hides a terrible secret that involves Sofia, plots against her, trying to separate her from the family. Sofia slowly gets involved with the lives of the Lombardo family.