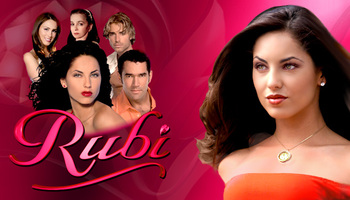 Rubí (2004-2005) is a telenovela produced and distributed by Televisa in Mexico, and distributed in the United States by Univision.The original story (with the same name) was a short story by Yolanda Vargas Dulché, published as a serial on the 1960s Mexican comic book Lágrimas, Risas y Amorfirst. The first telenovela adaptation aired in 1968 and was remade in 2010 in the Phillipines.
Advertisement:

The 2004 remake stars Barbara Mori as Rubí Pérez, a beautiful smart student on a scholarship at a prestigious school thanks to the hardwork and efforts of her older sister Cristina. She desires to be rich by marrying her way out of poverty. She is best friends with Maribel de la Fuente, a wealthy yet kindhearted lady with a defect on her left leg which prevents her from having a normal social life.

Rubí meets Maribel's boyfriend Héctor Ferrer , an architect, and his best friend Alejandro Cárdenas, a doctor. Héctor intrigues her because she knows he is very rich, and marrying a rich man has always been her ambition to leave poverty behind. However, she finds herself falling in love with Alejandro. Héctor and Maribel get engaged. Rubí starts dating Alejandro, but when she finds out that he is from a middle-class background and is not rich, she dumps him, though it breaks her heart. Rubí's mother tries to make Rubi see that money is not everything and that she will regret leaving Alejandro. She then sets out to seduce Héctor and makes it her mission to escape the poverty she is in.