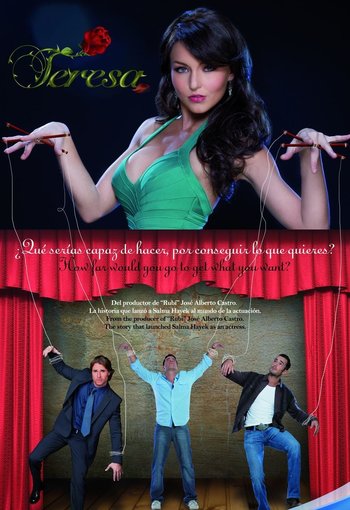 Teresa (2010-2011) is a telenovela produced and distributed by Televisa in Mexico, and distributed in the United States by Univision. The original story (with the same name) was first aired in 1959 and remade in 1989 starring Salma Hayek; with one film version and one Brazilian remake.

The 2010 remake stars Angelique Boyer as Teresa Chávez. She's a smart, beautiful, and ambitious young woman who lives in a poor neighborhood in Mexico City. She attends a school well above her parents' means and to avoid being judged harshly by her classmates, she tells them her parents are also wealthy but never around.

Her ambition turns into Greed and she makes up her mind to do whatever it takes to become as rich as her classmates' parents. Her goal is to marry her wealthy boyfriend Paulo so she can secure status and wealth. She's often at odds with Aida, who has always liked Paulo. When Paulo and Aida find out the truth about Teresa's home life, they expose and humiliate her at a party. She promises she will get even with them no matter what.