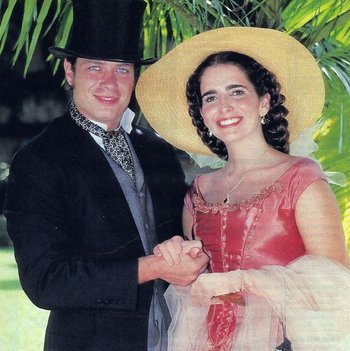 Força de um Desejo is a Brazilian telenovela produced by Rede Globo, and written by Gilberto Braga. It aired in Brazil between 1999 and 2000 with its 226 episodes.

The telenovela is one of Rede Globo most ambitious projects as it is a Costume Drama (with some Western and Mystery Fiction thrown in) set during the second half of the 19th century (the 1860s) and also the plot had as its backdrop remarkable facts of Brazilian history, such as the Paraguayan War and the abolitionist movement. Also the ambition of the production shows in many factors: the cast was fairly inclusive, as many prominent characters were black or mixed-raced; while the historical datas as not white-washed and the brutality of slavery was well-represented. Many famous works set in the 19th century were an influence on the characters and costumes (Camille (1936), The Leopard, and Shane cited by the production team).

The plot is quite thick. In spades, Higino Ventura is a former peddler who became wealthy from shady dealings and bought the Morro Alto farm in Vila de Santa Ana, to get closer to his lost love, Helena Silveira. The woman is married to baron Henrique de Sampaio Sobral and has two sons, Inácio and Abelardo. Ventura is willing to do anything to win back Helena but she has moved on from him, still while her marriage is unhappy because an unstated secret divides her and Henrique, who mistreats her.

Their firstborn, Inácio leaves the estate for Rio De Janeiro after calling out his father over his treatment of his mother. In Rio de Janeiro, he meets Ester Ramos Delamare, a beautiful courtesan and owner of the most famous and exquisite salon. The two fall in love and Esther decides to abandon her worldly life to live a relatively poverty with Inácio while he carries on his studies. However, Inácio' scheming grandmother, Idalina Menezes of Albuquerque Silveira fears her grandson's marriage with a lower- class girl and writes a breaking letter to Esther with Inácio' counterfeit signature. The shenanigan works and the two are separated.

Inácio' mother meanwhile dies of a sudden illness, leaving her husband and sons devastated by Helena's death and her husband with crippling feelings of guilt for mistreating his wife, and leaves decides for a long trip to Rio De Janeiro. After meeting a disillusioned Esther, he falls in love with Esther without knowing that she is his son's great love. He proposes her marriage after having convinced her that life is still worth living and the two get married and return to the Sobral estate, Ouro Verde. Ester and Inácio are reunited as stepmother and stepson!

After some animosity, the pair discover the responsible of their separation, Inácio's evil grandmother. They still fail to come clean to the baron is ill and needs the support of his family. Unhappy with the situation and knowing that Ouro Verde is facing financial difficulties, Inácio marries Alice, the spoiled daughter of Higino Ventura and his wife, the ditzy Barbara.

Meanwhile, Ventura fights to buy the Ouro Verde and humiliate Sobral. After grieving the loss of Helena, he becomes obsessed with Olívia, a mysterious young woman with a vague past, and with a urging need to leave the country... Scorned by the girl, who is enaged to the town's doctor, Mariano, he seeks informations about her past and discovers that she is a white (3 parts white, 1 part black) slave who lives on the run and since her owner has reported her disappearance.

But one fact shakes the entire village of Sant'Anna: Baron Henrique Sobral is murdered during the engagement party between Abelard and sweet Juliana, the same night that Inácio and Esther flee to live together after finding out he faked his illness and knew about them all along. Local police mobilize to arrest Inácio, the prime suspect for the murder. Then a race against time begins that Inácio will not pay for the crime committed, while those who believe in him try to unravel the identity of the real killer.

The telenovela displays the following tropes: