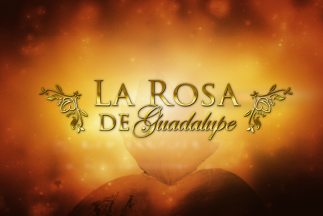 La rosa de Guadalupe ("The Rose of Guadalupe") is a Mexican, Catholic-themed anthology drama series produced by Carlos Mercado Orduña for Televisa. It premiered in 2008 and has been in broadcast since then.
Advertisement:

The titular Guadalupe refers to Our Lady of Guadalupe

, a Mexican title for the Virgin Mary. She's considered one of the most important symbols that represent Mexico, and the one that best represents mestizaje: the combination of Virgin Mary, brought to Mexico by Spanish Catholics, and Tonantzin, who represents Mother Earth in Aztec Mythology and Nahua religion (Tonantzin, in Nahua, means mommy).

Each episode presents a self-contained story, and its formula is pretty much the same every episode:

There is some Truth in Television: Over 80% of Mexicans are Catholic

, and the Lady of Guadalupe is an important icon in Mexico. Her basilica in Mexico City is the most visited Catholic pilgrimage site in the world, and third most visited sacred site. Mexican historians and writers have said Mexicans are Guadalupan before they're Catholic.

Obviously, there are no white roses that appear out of nowhere when people pray to her, but it's common to offer her white roses.

The show has been met mostly with negative reception by viewers and critics alike: usually because of its lack of proper acting, writing and directing as well as its cliché-filled storylines, not to mention some episodes have an awful lot of Critical Research Failure regarding certain social groups. Most Catholics specially dislike the way it portrays the Virgin of Guadalupe, claiming the series does not do her any justice and treats her as if she were a product brand. Nevertheless, like many other of its kind, the novela is thoroughly enjoyed by lonely stay-at-home wives and drama aficionados.