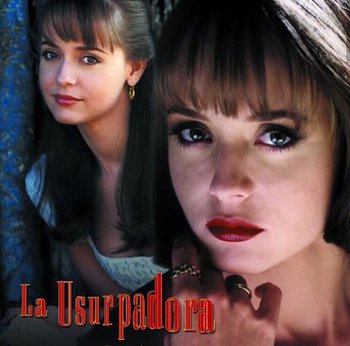 Deceptions (original Spanish title La usurpadora, "The Usurper") is a very popular Mexican telenovela produced by Salvador Mejia Alejandre and originally broadcast in 1998. It has become one of the most popular and exported Televisa telenovelas, having been licensed in 125 countries and dubbed into 25 languages.

The beautiful Paola Bracho (Gabriela Spanic) is a wordly, sophisticated golddigger who loves smoking, drinking and partying in the company of handsome men. She married the tragically-widowed Carlos Daniel Bracho (Fernando Colunga) for his money and feels stifled and bored by her married life. As a result, she often lies to her adoring husband and flies around Mexico in search of entertainment. On one of these travels, she runs into a young woman who looks exactly like her: the humble, honest and kind-hearted Paulina (also Gabriela Spanic). After recovering from her initial surprise, Paola hatches a plan to send Paulina back to the Bracho house for one year so she can jet set around the world with her newest paramour, a millionaire by the name of Alessandro Farina. Paulina initially refuses, but is framed and blackmailed by Paola into accepting.

After only six days of coaching by Paola, Paulina arrives in the Bracho house and quickly discovers that her situation is much more complicated than she could have ever expected: a string of Paola's lovers quickly begin to harass, threaten and blackmail her, her in-laws Estefania and Rodrigo hate her, the children are being emotionally neglected an and displaying strange behavior and the grandmother Piedad (Libertad Lamarque) is suffering from alcoholism which Paola had previously enabled. Paulina resolves to bring back order into the Bracho house and restore what the selfish Paola had destroyed, all the while trying to keep the adoring Carlos Daniel and her own growing feelings for him at bay...