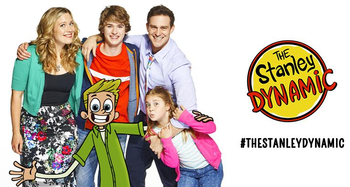 The Stanley Dynamic is a Canadian live-action/animation hybrid sitcom from Nelvana that airs on YTV. It ran from 2015 to 2017.

The series follows the Stanley family, which consists of:

In each episode, the family does activities that usually end in silly hijinx.

No relation to The Stanley Parable.

No great bucket list is complete without a bucket of chicken.

No great bucket list is complete without a bucket of chicken.