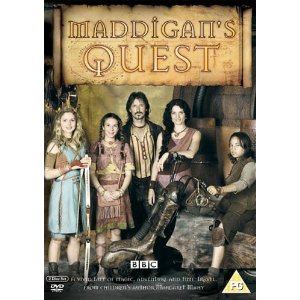 The DVD cover - Garland, Lilith, Yves, Maddie and Boomer.
"When the Great Chaos changed the face of the world, out of the ashes came Solis- the shining city, our home. Every year we leave Solis to earn some bread, to spread some joy, to entertain. But this year, things are different and dangerous. We have a job to do, a mission for Solis. One that will take us far from home."
Advertisement:

Maddigan's Quest was a fantasy-based television series set in a post-apocalyptic future, based on an original concept by Margaret Mahy and developed for television by Gavin Strawhan and Rachel Lang. The show was aired in the UK, New Zealand, the USA and Australia in early 2006, and in Russia in 2008.

Early in the 22nd century, the world underwent a vast and rapid change. The tectonic plates began to shift and rapidly changed the face of the planet, becoming known as the 'Great Chaos'. As a result of these events, the population of Earth plummeted and the governments of the world collapsed. What is left is largely a Scavenger World, where slavery is not uncommon and bandits roam the roads. Only a few cities are left, and of those, fewer still have managed to maintain any kind of order.

Maddigan’s Quest follows the circus troupe ‘Maddigan’s Fantasia’, who come from the city of Solis. Each year, the Fantasia leave Solis to perform and earn a living, but this year is different: they have been set the task of obtaining a new Solar Converter– the only power source in Solis– to replace the existing one, which is failing. At the centre of this quest is 14-year-old Garland, the final member of the Maddigan family line.

During the Fantasia's journey, two boys and their baby sister appear from the future. They reveal that they were sent to help the Fantasia in their task; in the original timeline, the troupe was wiped out by scavenger attacks and at the Winter Solstice, the solar converter failed and a dictator known as the Nennog took control of the city, over time reducing it to a radioactive hellhole. But while the younger brother, Eden, seems to be a blessing to the performers with his ability to do magic, something's wrong with his older brother Timon- a dark secret which threatens the Fantasia, their mission, and the future of Solis itself.

Sadly the show's fandom was never large, and while there are some isolated fanfics out there, it is now largely unknown. However, the show received a small boost in popularity after several cast members were reunited in Power Rangers RPM.