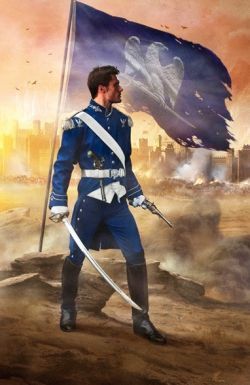 "Flintlock fantasy" series by Django Wexler, covering five full-length novels thus far (The Thousand Names, The Shadow Throne, The Price of Valor, The Guns of Empire, and The Infernal Battalion) and three novellas (The Penitent Damned, The Shadow of Elysium, and The First Kill).
Advertisement:

The series chronicles the trials and adventures of a group of soldiers in the First Colonial Infantry Regiment of the Royal Vordanai Army, serving out punishment tours in the worst of Vordan's far-flung overseas colonies, which is currently being overrun by a gang of religious fanatics hell-bent on revolution. Things at home aren't rosy, either; Vordan is heavily indebted to the neighboring kingdom of Borel, the Ministry of Information has a nasty habit of snatching citizens off the streets, and the king is fatally ill, leaving his teenaged, painfully sheltered daughter next in line - and a perfect target for the evil duke who runs the spy service and is scheming for the throne.

And in some learned circles, rumors begin to travel about an old power, long suppressed by the Sworn Church: magic...