Film / May I Please Enter?

I am standing in front of a very beautiful, big, brown house, at 14, Rid Road. It's one of the most beautiful homes I've ever seen. I don't know who lives in it. But when I find out, I intend to ask them one question... 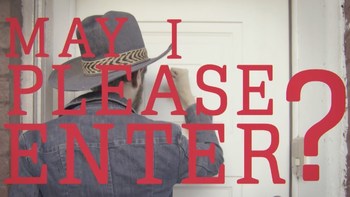 May I Please Enter is a short-film produced by Wham City and broadcast on [adult swim] in 2018.

Alan Resnick plays a nameless cowboy who spends his time wandering around to visit people's homes. The film is spent showing his time as a guest in the house of Amy and John, who seem rather normal...on the surface, that is. What follows is a rather mundane house-tour, interspersed with moments of off-beat horror and confusion.

Tropes found in the short-film: