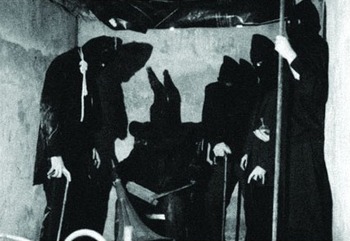 The lads themselves.
Advertisement:

Portal (not to be confused with the video game of the same name) are a technical/avant-garde death metal band from Australia known for their chaotic sound, Cosmic Horror inspired lyrical themes, and being Darker and Edgier even for death metal. They are an Anonymous Band, known only by various stage names and dressing in executioner hoods (or in the case of lead vocalist The Curator, a bizarre outfit made to look like a grandfather clock) when playing live. Their sound is an immensely dense, dissonant, and noisy fusion of Death Metal and Black Metal, characterized by extremely distorted guitar riffs, Uncommon Time, and vocals that range from guttural growls and grunts to menacing roars. Their anonymity and legitimately evil, hideous sound have led to them being acclaimed as one of the few truly frightening bands in the world of death metal.