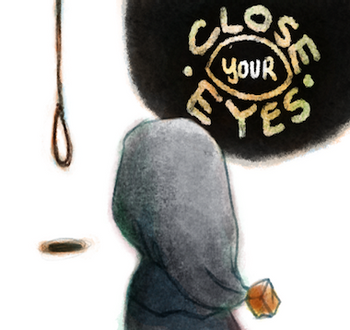 Close... your...eyes...
You're a murderer, we all know it. But do you think you are?
— The Host
Advertisement:

. Originally created as a shorter game simply titled as Close Your Eyes for Ludum Dare 29, the Redux edition added new content to the game. The game opens with a game show-esque host simply called The Host, who is introducing a "contestant" (the main character) who is about to be hanged. As the platform is released, the rope breaks and the main character, called Marshmallow Monk, flees from their execution into a surreal world. The game uses mostly symbolism and vague implications to hint at what is going on.

Close Your Eyes: Redux can be downloaded here

An even more improved edition of the game, titled Close Your Eyes: Redux Final Expansion was released on Steam

for free on August 31, 2015. It's stated to be over twice as long as the original game, with new locations, new scenes, new scares, and such. However, it was not truly the "Final" expansion, as Close Your Eyes -Anniversary Remake- was released through Steam

on the game's fifth anniversary in 2018. This version of the game is not freeware, but in addition to even more content, the Anniversary Remake has various unlockable "bonus modes", including a built-in version of its predecessor, Girl's Graveyard.

In 2020, a semi-sequel/spin-off was released, titled Feast Your Eyes.