Literature / The Problem of Susan 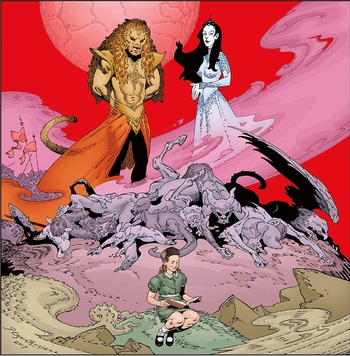 "There must have been something else wrong with Susan," says the young journalist, "something they didn’t tell us. Otherwise she wouldn’t have been damned like that, denied the Heaven of further up and further in. I mean, all the people she had ever cared for had gone on to their reward, in a world of magic and waterfalls and joy. And she was left behind."
Advertisement:

"The Problem of Susan" is a 2004 short story by Neil Gaiman which is part-homage to The Chronicles of Narnia, part-homage to "the power of Children's Literature".

A young journalist profiles a retired professor of children's literature. During the ensuing conversation, both consider the influences that literature has had on them.

It was adapted into a comic book by Dark Horse Comics in 2019.