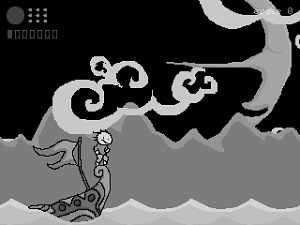 "um.
i'm stuck."
— The protagonist, upon entering the cupboard

UIN is a free surreal adventure game made in Game Maker by the indie cult developer Matt Aldridge, under the handle Biggt. Aldridge is best known for his mind-boggling experimental series La La Land. You play as an unnamed boy with scraggly, sparse hair who follows his brother into a cupboard to figure out what he's up to, only to find himself trapped in a depressing, monochromatic, monster-filled dimension, eventually unraveling an abstract grasp at what his family's been up to.

Though Biggt, under that alias, seems to be AWOL, you can still download the game from here

. The Game Maker Community thread for UIN is here