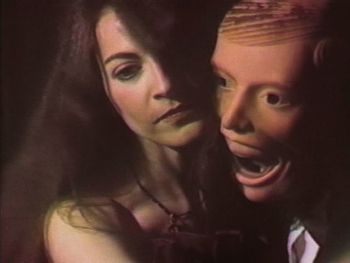 "Have we met before...possibly in Michigan?"
Possibly in Michigan is a 1983 short film written and directed by Cecelia Condit. It explores the predatory, often self-destructive aspects of love and romance, but also takes a dark look at female friendships; all served up with a liberal splash of surreal horror. It can be viewed here.

The film introduces us to two friends, Sharon and Janice, whose thoroughly banal afternoon at a shopping mall is overshadowed by a looming, sinister presence...

Note: Due to the short length of the film, all spoilers will be unmarked. Proceed with caution.