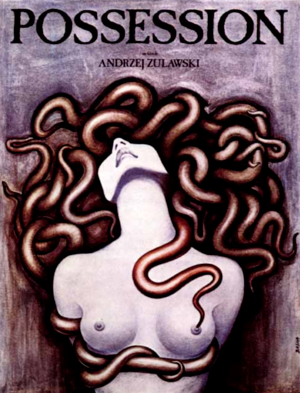 "What I miscarried there was sister Faith, and what was left is sister Chance. So I had to take care of my faith to protect it."
— Anna
Advertisement:

Mark (Neill), a secret agent, returns from an overseas assignment to discover that his wife Anna (Adjani) has left him. After she disappears, abandoning their child in her apartment, Mark manages to track down his wife's lover. He turns out to be Heinrich: a swinger who knows kung fu and lives with his mother. However, Heinrich also hasn't seen Anna for weeks. Together, the two men track down Anna's new lover, a lover that might not even be human...

Banned in the UK, most likely due to Carlo Rambaldi's impressively goopy effects, which still hold up quite well today. It's currently available uncut on DVD/Blu-Ray.

Not to be confused with the 2012 Sam Raimi film The Possession. Or with Possession: A Romance by A.S. Byatt.