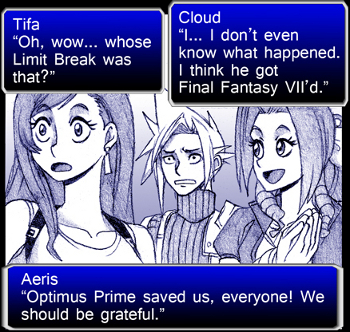 Once upon a time, a train carrying a band of freedom fighters pulled into a station. And this led to a Super Soldier and his True Companions beginning an epic crusade against a worldwide Mega-Corp, culminating in a battle against a One-Winged Angel to prevent the very extinction of mankind.

Final Fantasy VII: The Sevening is an exaggerated, manga-styled Affectionate Parody of the landmark PlayStation RPG, Final Fantasy VII. Pages 1-252 were serialized on Smack Jeeves by Decalyn and ObstinateMelon, but was wiped upon the closure of the site at the end of 2020, but it can still be found on DeviantART. It pokes fun at everything from plot holes to the game's questionable translation.

The entirety of the collection can be also found on ObstinateMelon's DeviantArt page.