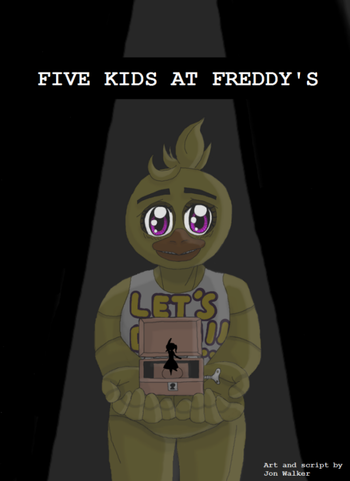 Five Kids at Freddy’s is a fan webcomic by Jammythewerewolf, based on the game Five Nights at Freddy's 2 by Scott Cawthon.

It follows four children and one teenager as they attempt to escape from Freddy Fazbear's Pizzeria after following a man in a yellow bear suit. Trouble is, the management already believes them to be dead, and has locked the place down. The pizzeria also just so happens to be home to several malfunctioning animatronics...

Following the completion of the first chapter in early 2016, Jammy decided to end it at that

, wanting to work on more original projects, and everything related to the comic was soon deleted. It can still be found through archives here

for Comic Fury, or here.