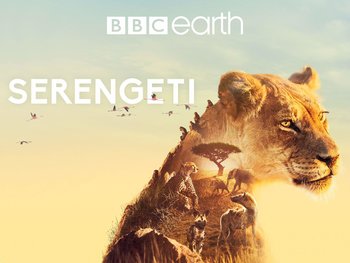 A dramatized story based on the real lives of Africa's most charismatic animals.
Many tales have been told of Africa. But this is our story — a drama set in the heart our world, experienced as we live and breathe it. This is the story of a year that changed all our lives forever. Mothers struggled to raise their young; jealous rivals tore families apart; youngsters battled to find their place in the world. Every day, we were all put to the test, by the elements, by the seasons, and by each other. This is the story of our lives in a place they call Serengeti.
—Opening Narration
Advertisement:

Serengeti is a Nature Documentary series about one year in the lives of African animals living in the Serengeti. It is narrated by Lupita Nyong'o in the US and John Boyega in the UK.

The series predominantly focuses around the stories of a few specific animals: Bakari the olive baboon, Kali the lioness, Shani the Grant's zebra, Kiki the cheetah, Zalika the spotted hyena, Jasari the painted dog, and Nala the savanna elephant.