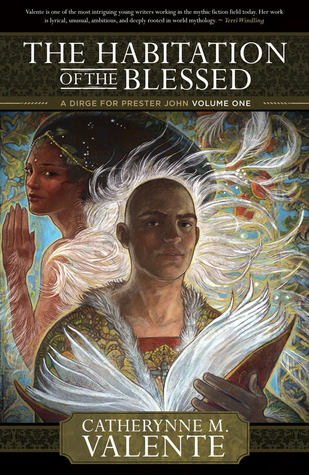 A book about books. Edible books.
A Dirge for Prester John is a fantasy trilogy by Catherynne M. Valente. It consists of:
Advertisement:

In 1699, renowned orientalist Hiob von Luzern voyages to India in search of the legendary kingdom of Prester John, where strange mythological creatures have been converted to the Christian faith. Upon arrival, he discovers only a small village and a woman in yellow, who informs him that Prester John is gone. Unwilling to accept this, Hiob looks for some evidence of the lost kingdom. The woman in yellow shows him an impossible tree, one which grows books.

The books tell the story of the final days of the land of Pentexore, told by John himself, but also his wife, the blemmye Hagia. The third book is a curious little volume that tells the story of an earlier time before Pentexore adopted the Abir, the lottery by which people's lots in life are chosen. This book is told by Imtithal, an account of her task to care for the queen's children and the stories she tells them.

A Dirge for Prester John provides examples of: