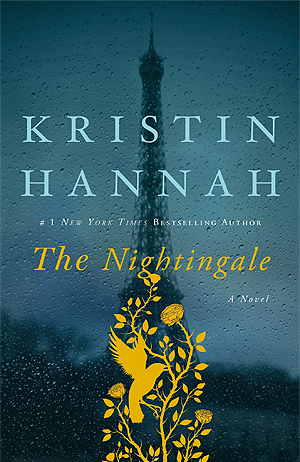 Some stories don’t have happy endings. Even love stories. Maybe especially love stories.
"I know now what matters, and it is not what I lost. It is my memories. Wounds heal. Love lasts. We remain."

A historical fiction by Kristin Hannah set in pre-war and occupied France during World War II. It follows the struggles of two French sisters—the quiet, cautious Vianne and bold, impetuous Isabelle—and their loved ones during the Nazi occupation. Their stories are told in retrospect while we follow an elderly French immigrant in 1995, who is living out her last days in the Pacific Northwest of the United States.

A woman with a terminal illness is being moved to a nursing home by her son, and finds an old trunk in the attic of her home, filled with memories of a past life. Over the course of her journey to the home and interacting with her son, she recalls the story of love and survival that was her experience during the war.

It is 1939. Vianne Mauriac lives in the French countryside with her husband, Antoine and their daughter, Sophie. Her existence is seemingly idyllic, filled with picnics, gardening, and plenty of time to spend with her loving family. War looms, however, and Antoine is called to the front in an anticipated defense against German aggression.

Meanwhile, Isabelle Rossignol, Vianne's little sister, is expelled from another boarding school due to behavior issues, and goes to live with her father, Julien, in Paris. They tolerate each other's existence until Germany finally invades. Julian forces Isabelle to evacuate Paris and go to her sister in the country right before Paris is sacked by German forces, hoping that at least they will be able to take care of each other until the war is over. Along the way, Isabelle loathes the idea of waiting out the war on the sidelines, and tries to find a way to help resist the invading Nazis...

The Nightingale was published in February 2015. It should not be confused with the fairy tale set in China written by Hans Christian Andersen.