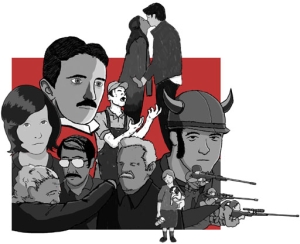 The only thing preventing the zombie apocalypse is 90 million tons of nuclear warheads. And you.
Advertisement:

A Real-Time Strategy game by Blendo Games, released in 2011.

Set in the 1960s, in Nuevos Aires, AZS tasks the player with evacuating as many people as possible, before they're overrun by the emerging Zed hordes.

To accomplish this, the player is given control of a rescue helicopter, as well as various mercenaries, capable of fighting the Zed.

That... and orbital nukes.