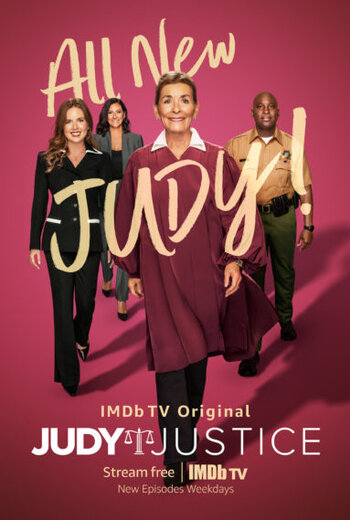 You talk. I finish. That’s the rule.
Court is back in session.
Advertisement:

Judy Justice is a streaming reality court show that is presided over by Judith Sheindlin. It is both Sequel Series and a Spin-Off of her earlier show, Judge Judy. The show features Judge Judy Sheindlin adjudicating real-life small-claims disputes within a simulated courtroom set. The show again features real legal disputes from typical small claims courts. The program is currently being produced by Amazon Studios and is broadcasted exclusively on Freevee (formerly IMDb TV) streaming service. It was reported to have been picked up for 120 episodes and has already been confirmed that Judy Sheindlin has signed on for 2 seasons. Meanwhile, Judge Judy is continuing on terrestrial TV in reruns.

While Judge Judy is back doing what she has always done, she is joined by a new cast: bailiff Kevin Rasco, replacing Judge Judy bailiff Petri Hawkins Byrd; court stenographer Whitney Kumar; and Sarah Rose, a law clerk and also Judge Judy’s granddaughter.

The series premiered on November 1, 2021 with new episodes to be released every weekday. Unlike the final season of Judge Judy, there is a studio audience and the judge is back hearing the cases in person, but they are physically distanced due to the COVID-19 Pandemic.

Judy Justice was renewed for a second season in March 2022, with the show having become the most popular on the IMDb TV platform in terms of "first streams and hours watched." According to Variety magazine, more than 25 million hours of the series had been streamed as of that date.