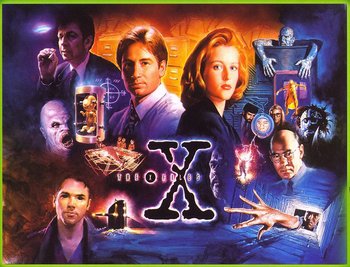 The X-Files is a Licensed Pinball Table (obviously based on the popular television series of the same name) released by Sega in 1997.

The game primarily revolves around the titular X-Files (collected in a cabinet in the middle of the playfield); spelling FBI lights one of eight episodes (based on actual episodes of the series) for completion. Completing all eight gives you a shot at the Wizard Mode. There’s also two different multiballs (one achieved by hitting the cabinet enough times, and “The Truth” – wherein you unscramble a message by making the right shots), as well as a choice between Mulder and Scully (who make it easier to start the regular and Truth multiballs, respectively).

The game has received very mixed reception; some people think it’s an overly difficult title with muffled audio and an excessive amount of focus on its two ramps, while others think it’s nicely challenging and underrated.