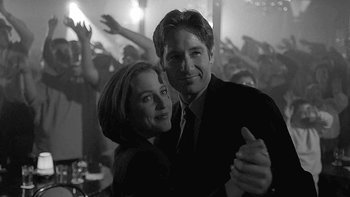 ♫ Put on my blue suede shoes... ♫
Mulder: Scully, I was like you once - I didn't know who to trust. Then I... I chose another path... another life, another fate, where I found my sister. The end of my world was unrecognisable and upside down. There was one thing that remained the same. You... were my friend, and you told me the truth. Even when the world was falling apart, you were my constant... my touchstone.
Scully: And you are mine.
— "The Sixth Extinction II: Amor Fati"
Advertisement:

Despite frights and losses being a mainstay in The X-Files, glimmers of hope and love can be found in Mulder and Scully's unbreakable bond.