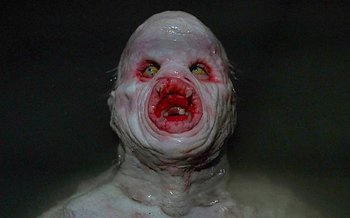 "I wouldn't change a day. Well, except for that Flukeman thing. I could have lived without that just fine."
Mulder: Do not trust this man, do not talk to him, do not engage him in conversation, even if he is unarmed. Approach him only with extraordinary caution, and then only with adequate backup.
First marshall: So what's adequate backup?
Mulder: Adequate backup? Every cop you can lay your hands on.
— The FBI's briefing on Robert Patrick Modell, "Kitsunegari"
Advertisement:

When one considers how The X-Files' theme song made whistling scary, you can bet that this show will deliver on the horror front.